Was “The King’s Speech” a True Story? The Real Life of King George VI

It’s inspiring to watch a man terrified of public speaking, even fearful of speaking at all, take on the challenge of delivering a speech to the world.

For him to accomplish this as a reluctant public figure with a serious speech impediment is even more inspiring. It makes us want to try harder too, at something, anything. 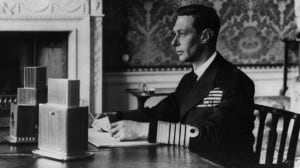 But after watching the movie we’re left wondering if it was the real story? Most of us can’t list the names of
the former US Presidents; much less recall anything we learned about the “Bertie” who became King George VI.

It doesn’t take a historian to tell us movies love to rewrite history. So what was accurate and what was exaggerated?

Was his stutter as severe as the movie depicted?

During the 1939 broadcast to address British involvement in the Second World War, the real King paused notably between words, as if he was correcting the words in his mind before he spoke them. His struggle was audible.

However, he simply did not speak as poorly as the movie had us believing. And it’s not hard to find more evidence to come to similar conclusions. His original broadcast speeches are available online.

Even so, he did have great difficulty with his speech and his confidence. After being thrust into the public domain with a stutter, he was required to communicate to the public more often than his predecessors and in a new way.

Radios were in homes across the nation. The last thing Bertie wanted to be was a radio pioneer. The technology to pre-record, then edit, did not exist. He had to speak straight into the microphone with no buffer between listeners.

Then, his mistakes were immortalized in recordings. Nazis heckled him with calls on the radio for ‘Your stammering King and your bandy-legged Queen’.

He was a constant smoker. Many sources report that he picked up the habit when a doctor advised him smoking would ease his stammering. He died of lung cancer at age 56.

His life truly was riddled with ironic jabs.

Was his speech therapy anything like the movie version?

Lionel Logue was an Australian speech therapist, public speaker and actor. He was highly praised for all his work. He had a very successful career teaching elocution. He was also a Christian Scientist and belonged to the British Society of Speech Therapists.

In 1926, Logue opened a speech-defect practice in London. Bertie was the Duke of York when he became a patient the same year. In the movie and in reality Bertie had good reason to feel deeply embarrassed after his disastrous 1925 speech. This humiliation prompted him to seek the therapist’s services.

Of course, we have no idea precisely what the two did in their sessions. What is certain is that they shared a close relationship from 1926 until the King’s death, 25 years later.

As in the movie, the King practiced strange vocal exercises daily. Logue believed the King’s stammer was the result of an uncoordinated voice box and diaphragm. The exercises were designed to stop anxious muscle spasms, which stopped the stuttering.

His speech improved rapidly. Within a year, the King had the vocal control to stop most of his stutters. He still spoke with notable hesitation, though not like the tongue-tied character we see in the movie.

Logue worked with the King for over two decades, coaching him through rehearsing speeches and preparing for broadcasts. Bold, confident Logue bonded closely with the reserved King.

Shortly after the King died, Logue sent a letter to Queen Elizabeth stating that since 1926 the King:

“…honoured me, by allowing me to help him with his speech, and no man ever worked as hard as he did, and achieved such a grand result.”

“He was such a splendid person and I don’t believe that he ever thought of himself at all. I did so hope that he might have been allowed a few years of comparative peace after the many anguished years he has had to battle through so bravely. But it was not to be.”

How To Ask For The Money And Close The Sale

How To Get Started With Your Business

So, What Is Fear… Really?