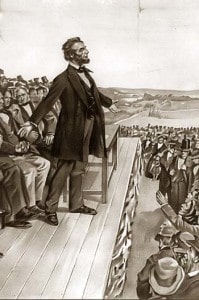 Who else is inside you?

We have all summoned the brazen part of our brain at least once. If we hadn’t we wouldn’t be this far in life. Think back to at least one time you surprised yourself with your boldness…

Got one? Good. If it involved using alcohol, please refer to the previous paragraph and try again.

Who were you most like at that time? Abraham Lincoln? Happy Gilmore? Britney Spears? What persona did you step into that transformed you from weenie to winner?

Many shy and introverted people are successful golfers, politicians, and even scantily-clad pop stars. All of which require overcoming the fear of failure. But mostly fear of scrutiny, the real cause behind the fear of public speaking, whether presenting or performing.

Abraham Lincoln was a mere farm boy from Kentucky, reported to be shy and awkward. Today, some people believe he had Social Anxiety Disorder. How did he go from delivering calves to delivering the Gettysburg Address?

Knowledge and passion. We’ve all heard the stories of Abe studying by candlelight in his log cabin. And from there he went on to law school. The confidence that came from his knowledge combined with his overwhelming passion to change the country propelled him out of Kentucky and into presidency.

Do you think he was nervous before speeches? Heck yes! But he booted that farm boy out of his head and became the eloquent speaker we know.

Next time you’re nervously waiting to speak, tell your old fearful self to “shut it.” Instead, remind yourself that you have come a long way (shy, awkward, uneducated people don’t often get invites to deliver speeches or presentations).

If you’re speaking on a topic you are passionate about, conjure up those feelings until you feel the emotion in your body. Passion gives us adrenaline, which gives us confidence. Then step into the character you want to be. You will nail it!

Happy Gilmore (both the movie title and character’s name) is a comedy about a washed-up, angry weenie. Adam Sandler stars as a hockey player who didn’t cut it in the big leagues. He finds himself broke and full of self-pity when he stumbles upon his talent for golf. Motivated only by money, he belligerently enters a highly publicized, open golf tournament.

Early in the tournament, he took out his fear of failure (and scrutiny) by hacking at the green with his club, putting with a hockey stick, and even duking it out with Bob Barker (Barker won, TKO).

Then, as tends to happen in movies, he gets a pep talk from a pretty girl. He loses the fuming facade and begins to genuinely try his best—come what may. Of course, he wins the girl, the tournament and the hearts of television viewers, by just being himself.

Despite its silliness, this movie shows us how resentment and a fear of failure will most likely lead to failure. But we can turn it around fast. Movie fast!

Next time you are ticked off that you have to give the company presentation (feeling resentment) — and you start pretending you don’t care (“it’s stupid anyway”) because you really do care (fear of failure) — execute a “Happy Gilmore.”

Get your head out of the sand-pity pit and take your best shot. Stop thinking and start doing. You probably aren’t going to get a pep talk from a beautiful actor or a Matrix-style movie scene… But you will gain respect. Because every audience appreciates one thing: seeing someone genuinely trying their best.

Not an Abe or Happy Gilmore?

Come up with your own character. It’s really about summoning the best part of you for the job. The self you need to be when you conquer the fear of what everyone else will think. Find it. Use it.

After all, where would be if Abe just decided to stay in his log cabin?

Is the Lack of Sleep Killing Us?