Next time you take the podium, man that PowerPoint laser, or endure a panel job interview—remind yourself that nothing you do could be as bad as these public speech gone-wrongs. 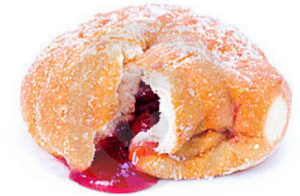 ward, though grammatically correct, indefinite article, as well as local dialectical disparities, that made the world laugh, for years.

Twenty-four years later, Reagan’s “Tear Down this Wall” Speech aroused compassion in the style of JFK’s original Berlin message. Nobody was laughing when the wall was torn down.

Or when a famous Berlin public square was renamed John-F.-Kennedy-Platz. He even got a plaque to commemorate the speech!

Next time you blunder in the boardroom or banquet hall – don’t panic! Stay cool and calm. And remember JFK. Remind yourself misspeaking (allegedly or truly) may ultimately make your overall message all the more memorable.

In his acceptance speech for winning best actor for the movie Philadelphia, Hanks thanked his former high school drama teacher, Rawley T. Farnsworth, then referred to Farnsworth as one of ‘the greatest gay Americans’ he knows. How poetically progressive of Tom.

So what’s wrong with it? The elderly, former drama coach had never come out of the closet! Until Tom Hanks announced it to millions of viewers.

This one does have a happy ending too. Farnsworth, ultimately inspired by Hank’s moving speech, joined an organization of gay teachers.

As an actor, Hank’s knows that public scrutiny is the real cause of a fear public speaking. And overcoming this is a powerful thing. But don’t get so relaxed you shift the scrutiny to someone else!

As Niven presented an award, a fully-devoted streaker dashed across the stage. Talk about an interruption! Niven quickly quipped, “The only laugh that man will ever get in his life is by stripping … and showing his shortcomings.”

The streaker later admitted he sneaked in disguised as a journalist. Staged by the Academy or real? Who knows?

The point is something went terribly wrong during Niven’s speech and he changed the outcome by quickly taking back the reins.

If you’re giving a speech or presentation and something goes terribly wrong the worst thing you can do is freeze from panic. You simply need to change the outcome.

You don’t have to be quick-witted or an Oscar winning actor to do this. Besides, it’s more likely you will forget a word or point you were going to make than, say, a naked man appearing behind you.

Always remember, the audience does not know what the outcome is supposed to be—so change it! Skip to the next point without missing a beat.

Move on to the next slide like they were just out of order and say “we’ll come back to this.” You never have to reveal your shortcomings to the audience!

While attending a banquet dinner at the home of the Japanese Prime Minister, Bush tossed his cookies then fainted in front of 135 diplomats.

The moral of this one is short and sweet: if the only sounds that can come out of your mouth are best made in a restroom cancel/depart/hide/call in. Just don’t show up at the Prime Minister’s house for dinner.

How To Get Started With Your Business

So, What Is Fear… Really?